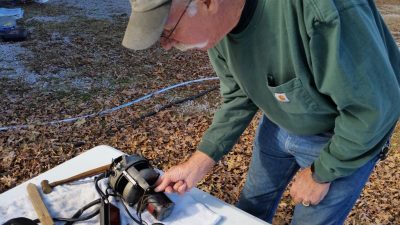 We know that we are short-timers.  By that I mean, nothing serious has broken in the coach for way too long so it is just a matter of time before some part decides to add a little consternation to our RV retirement adventure.  That is why we are not surprised that on our last night in Delaware as the temperatures threaten to plummet to the low thirties, our Hydro Hot heat system starts groaning in agony, heaves a last sigh and dies.  Adamantly refusing to gently waft warm pleasing air into our coach over a scalding hot tank of water as we have come to expect from this system, it abandons us to the elements.  Normally this would not be a big deal as the RV has redundant heating systems. The natural gas like warmth of the relatively quiet diesel fired Hydro Hot is just so much more desirable than the toasty but cacophonous overhead roar of the electric heat pumps.  Further impediments to warming the coach include the fact that in Storm’s sister’s driveway where we are parked we only have access to an amemic 110 volt electric cord plugged into a GFI circuit that is as sensitive as a PMSing Drama Queen on prom night. Our small ceramic heater kicks the breaker as soon as the tiny heater blows out the briefest puff of warm air.

Since we want to depart Delaware at the break of dawn to arrive at our next stop before dark, we decide to tough it out in the cold RV under a summit of comforters and blankets rather than in the tempered comfort of Barbara’s spare bedroom.  In the morning, Storm leaps from the bed an hour later than he planned and as soon as he acclimates himself to the frigid temps outside our cocoon he tries to extract me from the snugness of my comforter cavern with no success.  Doing my best Punxsutawney Phil on a sunny groundhog day imitation, I retreat to my burrow each time Storm coaxes me to stick my head out.  A new inch of ice forms on the end of my nose every time I expose it and soon I resemble a frozen Pinocchio.  Storm starts the generator and waits for the bedroom to thaw enough to lure me out.  Once out in the “fresh” air we are inspired by the need to keep our blood circulating and build up body heat so we actually get on the road pretty quickly (skip the glacial shower, I am too cold for dirt to stick to).  Comforted by the knowledge that once we get set up in MY sister’s driveway we will have 50 amp service and can run the heat pumps, we bask in the rays of sunshine streaming through our windshield as we head south.

Storm begins operation Heat Recovery the next morning.  Thankfully he has cleverly stashed away an extra burner motor drive coupling set in anticipation of his annual service on the heater or of a premature encore malfunction of this part.  Unfortunately his initial belief that the drive coupling he replaced in February of last year has failed oversoon is only partially correct. After he replaces the coupling set the unit runs, but something is still making an unsettling noise.  In hopes of a speedy solution, he contacts Aqua Hot RV Hydronic Heater Repair Center at 916-214-6518 (just in case you are also being tortured by a recalcitrant heater) and after a few web forum exchanges determines that we need a $500+ control box.  To help me better understand what we are up against, Storm explains that the Hydro Hot will now run through both the water heating and motor cool-off cycle, but at the end of the cool-off cycle begins an alarming mechanical stutter instead of shutting down as it should. We order the part and try to decide how to manage our hot water limitations over the holidays.

Here are our options:

Stay tuned tomorrow for part 2 of our story…  Does the new part work and why is the Living Room Slide not retracting right anymore?!?!

6 Replies to “Trouble on the Frozen Horizon Part 1”

There is no shortage of good days. It is good lives that are hard to come by.