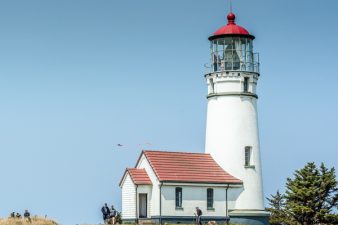 Unlike the relentless, inescapable mosquito thwarting winds in South Texas, the winds here are strong, but avoidable and insect free.  Northwest winds blast across the cape in excess of 30 mph at Cape Blanco on most days.  But the moss adorned canopy protecting the shoreline disarms the potentially forceful nuisance and releases it into the campground as a humbled, harmless breeze.

Beyond the protection of the sheltering timber, the skies above the cape remain uncluttered.  Occasionally buzzards and gulls practice hovering skills over the beach, diving for snacks in the surf.  Sparrows hug the ground while hurdling themselves against the gusts.  Few humans voluntarily subject themselves to the whims of the prevailing gales aloft.

People adapt here.  They learn not to open opposing cars doors simultaneously.  The wind tunnel created through the car allows loose objects to exuberantly fly out and mount the wind never to be seen again.  Although the airport is only two miles away, small planes rarely attempt a turbulent overflight of this blustery point.

Several people explain to Storm and me why the wind usually blows so fiercely at this cape.  One popular theory is that extremely hot inland temperatures pull the cooler ocean air towards the area of heat creating a strong NW flow.  This week when inland Oregon temperatures near 114, the wind here at Cape Blanco vanishes.  Guess we need a new theory 🙂

As a result of the diminished winds this week, we are treated to a variety of aerial displays near the lighthouse.  Skillful paragliders soar over nearby bluffs spending entire afternoons roller coasting along the cliffs.  Families test their skills with dancing kites on the lighthouse grounds.  On Sunday, a group of Remote Controlled Gliders displays their mastery of the gentle winds by flying formations along the beach bluffs.  Small planes appear overhead circling the lighthouse for a rare airborne view, then head inland.

No longer rushed to shore by impatient gusts, the ocean calms and fog cloaks the cape.  Under those conditions, I am able to take some photos from the beach without the painful sandblasts that I usually endure there.

We should not look back unless it is to derive useful lessons from past errors, and for the purpose of profiting by dearly bought experience.