Tickled various shades of pink because we have time to stop for a few days in Mesa Verde on our way to Albuquerque, we plan to investigate this park as thoroughly as a crime solver collects clues. Our previous motorcycle motivated stops were too short to explore the ancient and scenic treasures being protected here and we hope to remedy that.

As soon as we pull into the campground we learn that diesel fuel sells here (yes, inside a National Park!) for almost 10 cents less per gallon than we saw anywhere on our ride here from Olathe.  Pleasantly surprised, Storm pumps diesel until the RV is full, drops our trailer in the convenient lot beside the gas station and heads out to find a temporary home in the spacious campground.  A tricky task because most of the sites are tent size, but Storm finally seesaws the RV crossways into a not terribly unlevel place on the Hopi Loop.

As we begin our round of tours to various dwellings in the park, we notice a difference in the tone of the Ranger presentations.  Ten years ago, the tours emphasized the religious importance of the cliff dwellings. Each tour we took into the dwellings was conducted so reverently, I was afraid to speak above a whisper.  Apparently theories have been re-evaluated to consider that since there are no written records by the cliff dwellers, we really don’t know exactly what their reasons were for choosing the cliffs as homes (though most everyone is willing to make an educated guess).  While the importance of Kivas is explained during the tours, Rangers focus now on how very populated the Mesa was during the time that the dwellers cultivated crops here (more people lived in this part of the country then than live here now) and how the dwellings might have been used for daily life, trade, work and entertainment.

One ranger related that archeologists tend to use religion as an explanation when no other clues exist.  But he cautioned that using that method, when (and if) archeologists are able to study remains of our civilization they may assume that those large rectangular boxes in all of our homes we call TVs were part of our religious worship.  So instead of whispering, on the Longhouse tour we were allowed to shout as a group out into the canyons to hear how the echoes from the dwelling may have allowed it to be used as a stage for the whole valley and that was awesome! 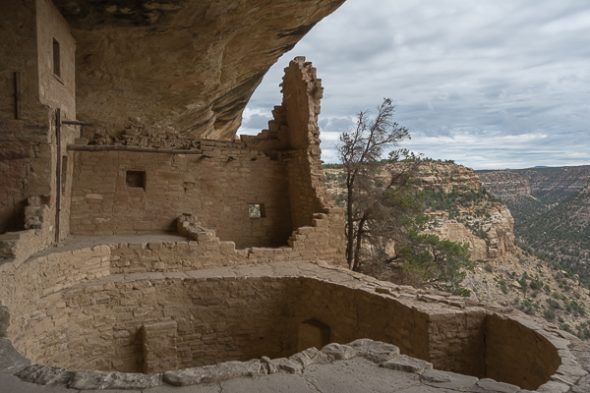 The highest proof of virtue is to possess boundless power without abusing it.