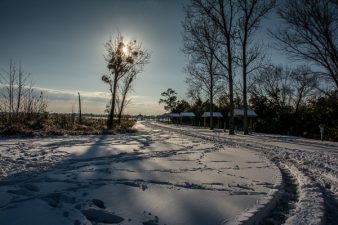 The last thing that we expected when Storm agreed to winter in New Bern so he could build an Air Cam twin engine kit airplane was to be trapped in the tentacles of a Coastal NC Snowmagedden!  Yet here we are up to our wheel wells in fluffy, powdery snow with low temps predicted to be in the single digits for the next 4 nights.

Someone pinch us and wake us up from this nightmare!  Of course since we never planned to spend time in the Arctic while RVing, we did not develop a strategy for coping with a frigid disaster.  A percussion of freezing rain performing a prelude to the blizzard on our rooftop, prompts us to pull in two slides and partially extend an awning over one living room slide.  Thankfully our water tank is full, the water line disconnected and waste tanks emptied!

That is it – the extent of our emergency preparation.  What we should have done was also:

Leaving one slide out marginally eases the cabin fever induced by our severely reduced living area.  The jury’s still out on whether the awning partially out over the one slide we left extended was a mistake or a smart move.  We are able to knock off some but not most of the snow from below by jumping and pushing up with a broom.  But snow is heavy and after a few minutes of trying to fling it up and off the awning, I start to get light-headed.  The awning is still sagging pretty badly over the slide. We can only pray at this point that nothing breaks or starts to rain inside the slide before the snow melts off.

Of course having the bedroom slide retracted makes for an interesting night of leapfrog.  With no walkway around the bed end, when one of us wants to get up in the night, the only option is to leap over the other one and roll them toward the back.  On the plus side, having the slides in makes the RV much easier to heat.

Once we are able to extend the two frozen slides at least the tops are snow free.  We have no reason to crawl on our icy roof and sweep off the slider tops.  We actually watched our neighbors do this.  Sticking to my philosophy of not recording potential disasters, I did not video them.  In fact I closed our windshield curtains so I did not have to watch!  The video below is of our expedition out into the snow.  Stay tuned for our next chapter in this adventure – “Storm Attacks the Frozen Foe and It Fights Back!”

6 Replies to “Can the Weathers Survive Snowmageddon 2018?”

Abilities wither under criticism, they blossom under encouragement.