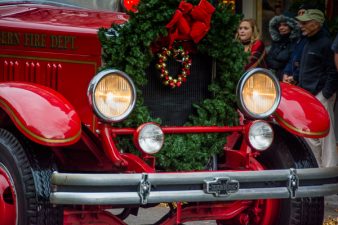 Dean and Terrie pilot their RV on its maiden camping voyage to join us for the Beary Merry Christmas events scheduled in New Bern this weekend.  In spite of the bubbling good cheer and potential for flying reindeer, Christmas celebrations don’t often reach the thrill level that Terrie craves.  We attempt to appease her with lunch at her favorite restaurant, The Chelsea.  Creamy, Crabby She Crab soup and a side of Shrimp and Grits seem to satisfy her appetite if not her hunger for adventure.

Next we plan to attend the Christmas parade through downtown New Bern.  I am thrilled that this small town event occurs AFTER Thanksgiving instead of two weeks before the annual gobbler sacrifice.  Accustomed to the not so merry seating battles of big city parades (impregnable chair walls, frosty possessive warning stares), we arrive 3 hours early to claim a spot.

We round the corner and what a surprise!  The cone cordoned parade route is chair free.  We plan to settle near the end of the parade.  We discover that on this part of the route savvy spectators arrive about 3:30pm to snag a front row space for the procession which starts marching at 3pm.  I love this laid back approach to ringing in the season.  With plenty of time on our hands, we walk at a calorie burning pace admiring the local decorations in preparation for a desert stop before the parade.

A frenzy of window shopping leads us back to the convention center.  Just inside we visit the visitor info booth to escape the promise of rain made by the now darkening skies.  Indifferent to this joyous day, gloomy, leaden clouds occasionally lose control of themselves and burst into sobs of rain.

Parents in the building vestibule wrestle squirming children from their reluctantly shed rain gear.  Once stripped of their waterproof garb, they dash clad in their finest church attire, be-ribboned or bow-tied toward the festive entrance to Santa’s Breakfast.  We learn that Santa has hosted 5 breakfasts today.  We just happened to wander in during the arrival rush for the 2pm “breakfast.”

We stroll the rain dappled parade route searching for a streetside pub from which to shelter in place during the holiday march. We dash from awning to awning looking for a spot offering desert, a warm drink, and a protected view of the street.  The Prohibition Bar with its heated, outdoor covered patio offers the perfect retreat.

Sparkling fire trucks shrilly blast holiday greetings at eardrum perforating volume to warn us of the approaching procession.  Shouts of Merry Christmas waft over us as children young and older shout their holiday joy to us from slowly moving bikes, floats and even a helicopter.   Lucky youngsters collect Halloween rivaling bags of candy hurled from the passing procession.

The parade begins to backflow up the sidewalk as band members and flag people in the lead elements return to their cars at the staging point.  Santa, undoubtedly exhausted from all of the breakfast sittings, drives the end of the parade toward the river.  We follow the crowd to Union Point park at the confluence of the Neuse and Trent rivers.

From the park we will watch the Christmas Boat Flotilla once the sun sets.  Storm finds a waterside spot to sit and rest from our day’s exertions.  Mesmerized by the holiday music drifting from the bandstand, I wander closer.  There the 2nd Marine Aircraft Wing Band from Cherry Point delivers a peppy holiday concert punctuated by a few military tattoos.  As the moon peeks through the now shredded cloud layer, the flotilla reflections drift slowly across the river.

Afterwords, we barely escape a stampette as the few children who missed breakfast earlier flock to Santa who is delivered to the park on a Coast Guard boat.  He floats to the dock and disembarks and then like a fur clad Pied Piper leads a string of kids to the bandstand and another round of Christmas consultations.  Could this be evening snacks with Santa?  So ends a relaxing and joyful day of celebration.  But I can’t help wondering if Santa has a diet and exercise plan worked out before his Dec 25th flight.  With all the meals he consumed today, there’s no way that sleigh will be within weight and balance limits unless he slims down a little!

Pictures from the Parades

Too short is always better than too long.