Storm and I heavily debate the route we will take to return to Colorado.  I vote for driving hundreds of miles north to avoid crossing any stratospheric mountain passes.  Storm reasons that we made it over Vail Pass once (barely and at night when it was very cool outside) and we can do it again.  Though I know the daytime outside air temps will be higher and working against us on this trip through, I finally relent and we head across Nebraska toward my nemesis – the Rocky Mountain Passes west of Denver.  I promise not to even glance at the RV temperature gauge until we begin our downhill descent after Vail Pass.

We leave Iowa at dawn to sneak ahead of the building daytime heat while timing our Denver arrival to avoid the morning rush.  We race a train into Nebraska and are soon on a nearly deserted interstate headed west.  Nebraska rates pretty low on my list of states to travel through on interstate highways chiefly because each one of their rest stops has parking for no more than 5 trucks. 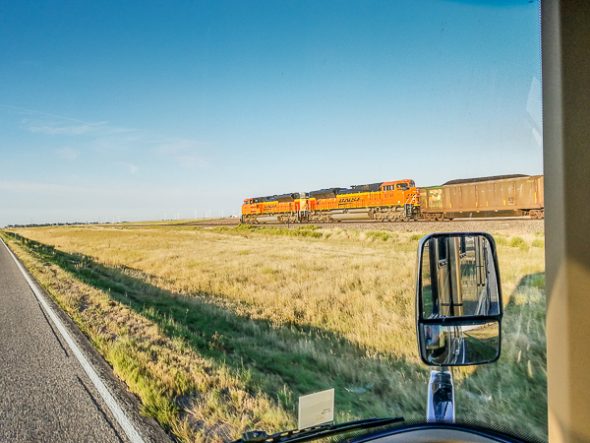 We never found a single Nebraska rest stop with an empty parking space for us along I-80 and with town exits few and far between, a short stop for lunch became a challenge.  There are no dump stations in Nebraska rest areas unlike their wonderful neighbor Iowa.  What is their problem??  Nebraska’s only redeeming travel feature are the conveniently located Cabelas Stores across the state.  We  overnighted in a Cabela’s parking lot just outside of Omaha and also at the flagship corporate store in Sidney where they have a Cabela’s campground with CABLE!  For almost a month we have been deprived of any TV signal (except 3 Public TV stations in Decorah) due to poor signals and no cable in the campgrounds.  In Sidney we are able to catch some of the Olympics – hurray!

Our mid-morning arrival in Denver allows us to breeze through that smog shrouded city. We can barely see the Rockies – very disappointing.  With outside air temps in the mid seventies, we start up the first long climb toward Loveland Pass. I keep my eyes straight ahead and my prayers wafting heavenward. 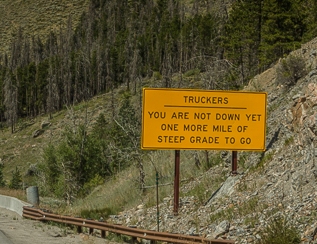 When we reach the summit, Storm pulls into an abandoned chain up area for a system cool down.  I never asked how hot the engine got on that first snail like climb, but it must have been steamy because Storm suggests a new strategy for the climb to Vail Pass.  He opens the locks on the engine compartment hood hoping that will create better airflow around the hot engine. We also open our windows and turn on the cab heat to help pull hot air off the engine.  We wait for the engine and transmission to cool back down to normal temps and crawl back out into the light traffic for a downhill brake test before our ascent to Vail.

Our precautions must have worked because we cross Vail Pass with plenty of temperature degrees to spare – yes, I finally peeked.  Breathing easy, I spent the long downhill run toward Grand Junction enjoying the spectacular ride through Glen Canyon.  These rugged, steep mountains and rushing blue canyon waters are the part of this road that I love!

Every journey into the past is complicated by delusions, false memories, false namings of real events.