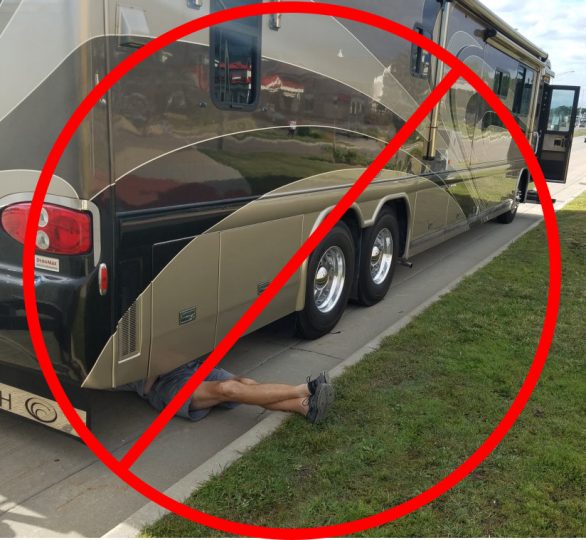 The work at HWH is a planned maintenance stop that we had been working toward since we left home.  We allow a week for their repairs and they finish in 3 days plus we get to sight see so all is good.  What happens next is unplanned and unexpected.

We leave Iowa with a leveling system that now wakes up and relevels whether it is warm or cold outside and after a run through the Iowa 80 Truck Wash, a clean RV.  We plan a short 4 hour ride up to the Wisconsin Dells (waterpark capital of the world) for a restful week before moving north to Oshkosh.  About 10 miles from the Country Roads RV Park where we intend to stay, Storm drives the coach through a strip of what looks like a fresh road patch on the side of the pavement.  Apparently it is about 5 minutes fresh as when we hit it the tires dig in like we are plowing through sand and asphalt covered rocks pelt the underside of our RV.  Right then I start to get a sick feeling.

Five miles from the RV park, the engine starts warming up a lot more than usual even on slight inclines. Three miles from the RV park, the engine temp starts to soar and things get warm in the cab as Storm and I heatedly debate the problem.  Storm argues that if I could tell him what that “strange smell is” he could figure out what is happening, while I maintain that the problem is “something else” not just the engine overheating.  Storm notices that we have NO air pressure about the same time that I see a parking space big enough for our rig straight in front of us at the city limit sign for Lake Delton (2 miles from the RV park).  We glide out of the traffic lanes just as the coach emergency brake fully applies and we are stuck (1.999 miles from the RV park).  At least we know why we were overheating – our spring brakes were slowly applying to prevent us from crashing with no air brakes and the coach engine was trying to move us forward against almost full brakes which is apparently harder than climbing Vail Pass. We begin to troubleshoot the air leak.

I frantically put in calls to Good Sam Roadside Assistance, the RV park and a nearby shop that Terry at the park suggests to me.  Storm is laying under the coach looking for the air leak and while under there he discovers that our starter is about to fall off! He tightens the starter bolts, then asks me to turn on the RV and try to build up enough air pressure for him to hear the leak.  Unfortunately the most air pressure I can build is 5 lbs and by the time I cut off the engine and his ears stop ringing from all of the diesel noise, that puff of air has bled out. We need a supplemental air source and one finally arrives courtesy of Good Sam in the form of a grease covered young man in a small white van which appears to be the ill-conceived mating of a used parts store and a full trash bin.  When he opens his door to get tools out spare parts, checks, cigarettes and more cascade into the street.  Oh my…

But he does have an air tank and with some pressure from it we stand a chance of finding the leak. Storm opens the engine compartment to get a better look at the problem and discovers that the muffler to turbocharger pipe on our engine is also about to fall off and is so damaged at the turbo inlet that it can’t be easily reattached.  He ignores that issue for the moment and is able to identify the source of the air leak – a hole that has burned into one of the air lines.  The serviceman miraculously produces a short piece of replacement line and a clamp from his “inventory” and within a few minutes of his arrival (we had to wait an hour while Good Sam searched for the cheapest callout service rate – the part they had to pay) we are able to build up some air, but not enough air to say that our problem is fixed.  I try to build up the normal air pressure of 120 lbs, but can only get about 60 lbs no matter how much I rev the engine.

After Storm devises a temporary fix for the exhaust involving a coat hangar tied in a bow, we decide to limp into the park with what is obviously only one air line working.  We make it safely to the RV park followed by the service truck (just in case) and after a stiff drink, a hug from Terrie who guides us to our spot and offers of help from both the park owners and a group of Prevost band tour bus operators, we turn in planning to re-address our problems in the morning.

Friday morning Storm locates the other leaking air line which also has a hole burned into it – easily fixed (with a sleeve from one of the Prevost drivers – THANK YOU!!!) , but we are still perplexed as there is nothing hot near these lines.  Oh well – time to figure out our exhaust problem.  Looks like when the Grand Junction folks replaced our radiator and had to fabricate exhaust clamps to replace the ones they removed, they didn’t bother to be sure everything was aligned and securely clamped so our travels since then have slowly worn off the flange that connected to the turbocharger.  As we pull the exhaust up through the engine compartment, we can see that the bottom of the pipe is covered in black asphalt. Ohhhhh – hot black asphalt covered rocks splashing up and landing on the plastic lines burned the holes in our air lines.  I am relieved that we have a theory for the air leaks as without an explanation I would would have been an uneasy rider when we left the Dells.

A call to Country Coach reveals that the exhaust pipe will not be an easy fix.  Five weeks and they can have a new exhaust pipe built for us.  Storm and I start working the phones like a politician’s staffer the night before an election.  We begin with shops near us and slowly expand our search.  Aliens with a broken spaceship seeking a part for a flux capacitor would have better luck than we do.  We can’t find anyone who will admit that they have a piece of 3-1/2″ OD pipe with a turbo charger flange on one end.  We find a piece of pipe online that will work but it is out of stock.  It can be ordered with a 2 week lead time and a minimum $200 order (the part itself cost less than $20).  We make a last desperate call to a person that I learn on internet Country Coach forums may have purchased the exhaust pipe inventory when CC went out of business. I leave a message asking him to call us back.  By then it is 5:30pm on Friday – everything is closed and it looks like we may be calling Wisconsin home for awhile.

The man in Oregon who bought out the bankrupt CC exhaust inventory calls us back Saturday to let us know that  he thinks he may be able to help and will call back Monday.  In the meantime, we hang out with the other RVer’s here learning that our troubles pale in comparison to some of the adventures that these folks have had.  At least our coach has not yet been wrecked while at a dealer being serviced and then presented to us half destroyed with the claim that it was like that when we brought it in.  We talked to 2 couples recently that experienced service shop crashes like that. In fact while we were at HWH one coach backed into another who was there for service and dinged it up a bit so we already know to be wary of damage at shops.

Monday we are back on the phones and by mid-morning it is clear that this plan is not working.  The guy from Oregon is incommunicado (turns out he left his phone home all day). Storm finally contacts a shop about 40 miles away from us where the owner agrees to at least look at what we have.  We drive south toward Madison and find the small one man truck lube shop tucked in behind a BP station.  Storm is greeted by a man who is buried under an even thicker coat of grease than the young man who came to our aid by the road.  Must be a sign of someone who knows his stuff as he took some measurements, dialed several supply shops from memory on his flip phone and finally found a distributor 35 miles further south who had just the piece of pipe that we need.  The place he called was one of the shops we called Friday that denied any knowledge of this part.  Storm tries to pay the man at the truck lube shop as he has by far provided the most valuable service to us but he will not accept payment.  We head south, pick up the precious part and return to the RV for some filing, cutting and welding.

The park owner Terry and his wife Terrie are fabulous at putting Storm in touch with local folks who have the tools and expertise to help Storm build up the pipe.  Once he has the pipe fabricated, I assume my new role as part-time mechanic’s helper and together we get the pipe hooked back up.  Storm then loc-tites the starter bolts, fastens up all the other wires, etc. that the Grand Junction folks left hanging loose.  We vow to make pulling up the bedroom floor and inspecting the engine compartment a monthly item in hopes that we can prevent future catastrophes.

Total Cost for this Adventure

4 Replies to “A Good Bad Thing”

There are very few honest friends — the demand is not particularly great.